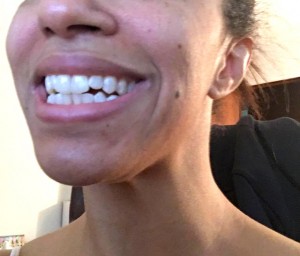 After three weeks of feeling beaten down and out of sorts from an upper respiratory infection, I thought I was in the clear–as far as dystonia is concerned. My arms had been feeling like they were on fire from a neuropathy flare-up, but my muscles were still cooperating with my brain, which is always greatly appreciated. In the midst of that period, I’d even been able to drive to visit my friend in the hospital, exposing myself for several hours to the same triggers that she sought to trigger her epileptic seizures–the brightness of fluorescent lights; the frequent beeps of medical equipment and monitoring devices; strong, unfamiliar scents; the chaotic hustle and bustle of her healthcare team doing their jobs–without major incident. I was feeling quite confident that I was stable enough to get my biannual dentist visit over with ease.

During my in-depth cleaning, my jaw started to stiffen and grow sore. I remembered to mention to my dentist that I woke up with an excruciatingly painful, locked jaw about a month ago. It took hot compresses, gentle stretches and massage to work my jaw back into its proper alignment with my natural bite. We supposed that I might have had dystonic muscle contortions in my sleep that threw my jaw off track. The dentist told me to keep an eye on things and let him know if these incidents became more frequent.

At the end of the cleaning, the dentist told me what I already knew–I had a couple cavities that needed addressing. I scheduled an appointment the next week to get fillings. Since I live more than an hour away, my mother drove me up the day before to stay with her and my dad overnight. My appointment was scheduled for mid-morning the following day. After the long drive and a stressful discussion with my dad, I was especially eager to hit the pillow that night.

Unfortunately, it was a restless sleep as my respiratory infection flared up again, making it painful for me to swallow each and every time. I silently cursed myself for not yet taking either medication my primary care physician had prescribed. I woke up the next morning feeling groggy and fatigued.

Later on, in the dentist’s chair, I noticed my right arm started trembling after my lower jaw was injected with novocaine. I shakily planted myself further in the chair and patiently waited for the medication to finish numbing the left side of my face. The dental procedure went quickly, though I noticed the temporomandibular joint that connects the jaw to the skull was once again very sore and tight. I took a time-out midway to massage it, and before I knew it, the visit was over.

As the novocaine wore off over the next hour or so, I felt increased tenderness and tightness in both sides of the jaw. Any time I tried to open my mouth too widely, I felt an acute pain on my left side. I had made the mistake of waiting until after the visit to eat anything, so as my hunger pangs grew, I cautiously slipped applesauce and then oatmeal into my mouth.

A couple hours after the dentist’s my mom and I were back on the road to bring me back home. As the novocaine continued to wear off, I felt that familiar discomfort settle across the top of my head. I, who never nap, felt as if I could pass out any second now. And before I knew it, my muscles began to contort, crumpling my body against the seat belt. Each wave of muscle spasms brought new torment–getting stuck trying to yawn but my mouth refusing to open; feeling my throat tighten with muscle spasms and congestion and struggling to breathe evenly; attempting to use my inhaler and freezing with the claw-like contraction of my hand, unable to take a second inhalation or move my hand away. My mother’s cool hand reached over from the driver’s seat to provide a gentle touch as a sensory trick to try to reduce the muscle contractions.

Just as we turned on my road, I managed to break out of the back-to-back dystonia storms to text my husband, who was working from home, to let him know we were almost there and that he might need to help my mom get me into the house. Despite my stumbling and faltering, we were able to make it to the doorway before I got stuck in another full-blown storm. My husband met us as the door and, gradually, he and my mom helped me get to the couch, where I would remain for most of the rest of the day.

I took my medication and rested on the couch until the Pramipexole finally took effect, gradually settling the muscles. I have a type of dystonia that is, by the luck of the draw, responsive to dopamine. Supplementing with medication that helps to restore the balance of dopamine–a neurotransmitter in which I am deficient–can reduce and temporarily manage the muscle contractions of dystonia. At times, this medication can do such a great job controlling the involuntary muscle movements and “stuck” postures of dystonia for me, that I can do many of the things I used to do before I developed full-blown dystonia, such as walk without assistance, drive shorter distances, do the physical practices of yoga, play a musical instrument or work on my writing, as I’m doing now.

Twisted But Not Broken–Beat Dystonia

Even after the supplementation of an amino acid the converts to increased dopamine in my brain, I still can exhibit symptoms of dystonia. Certain medications (like novocaine), weather changes, extreme fatigue, other illness and both physical and emotional stress can aggravate the nervous system, worsening symptoms. Even talking for extended periods of time can fatigue the jaw muscles, triggering them to spasm and twist, causing stuttering; or they can “lock up,” temporarily preventing me from opening or closing my mouth.

Not everyone with dystonia responds to dopamine either, unfortunately. Botox can be injected into the muscles in small doses, which interrupt nerve messages to the muscle and prevent the release of neurotransmitter acetylcholine, which triggers muscle contractions and subsequent weakness. When drug therapy doesn’t work, patients often need a neurostimulator surgically implanted in the body. Deep brain stimulation (DBS) sends electrical impulses to the brain to block or hamper the nerve signals that cause dystonic symptoms.

Unfortunately, even with treatment, dystonia is often not predictable. While symptoms may be managed for hours, days, and even weeks at a time, dystonia can continue to sneak up on you, even when you least expect it. Like when you are brushing your teeth in the bathroom and a violent episode makes you hit the floor, as happened to me last night after several hours of calm.

That’s why additional research and increased awareness of this disorder–the third most common neurological movement disorder behind essential tremor and Parkinson’s–is needed. Readers can learn more about dystonia at 5DollarCure.com. Please consider contributing toward research for a cure at the site. Of the funds raised, 100 percent goes to the Dystonia Medical Research Foundation, which is committed to supporting the needs of patients with dystonia and to advancing research for more treatment options and, ultimately, a cure.