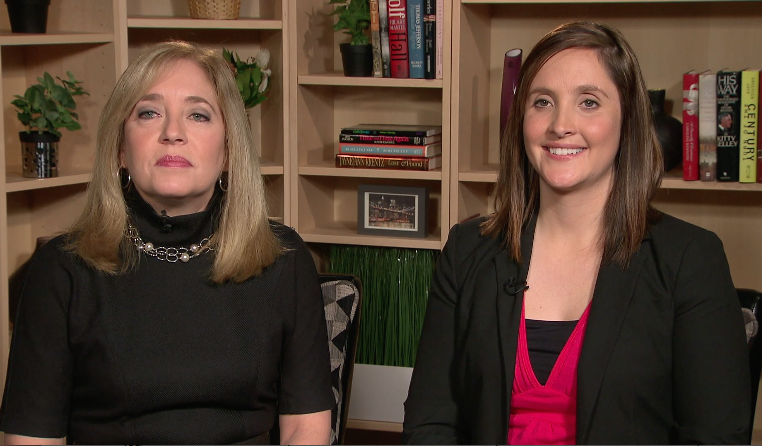 If your child is consistently complaining of pain in the stomach, he or she might not just be bellyaching to get out of a day at school. An estimated 38,000 children and teens in the United States live with Crohn’s disease, which causes chronic inflammation of the gastrointestinal (GI) tract. While Crohn’s disease can occur at any age, it tends to be most prevalent in teens and young adults, ages 15 to 35. Nicole Pingel was just a young teen when she first developed symptoms of the disease.

“I think the big thing for me was developing stomachaches,” said Pingel, now 26, in a recent interview. “Especially as a teenager, or when you’re younger, some of the symptoms, like diarrhea, can be extremely embarrassing to talk about.”

Overcoming adolescent reticence, Pingel shared her symptoms with her parents. After then seeing her primary care physician, she was eventually referred to a pediatric gastroenterologist. At the age of 14, Pingel was diagnosed with Crohn’s disease. 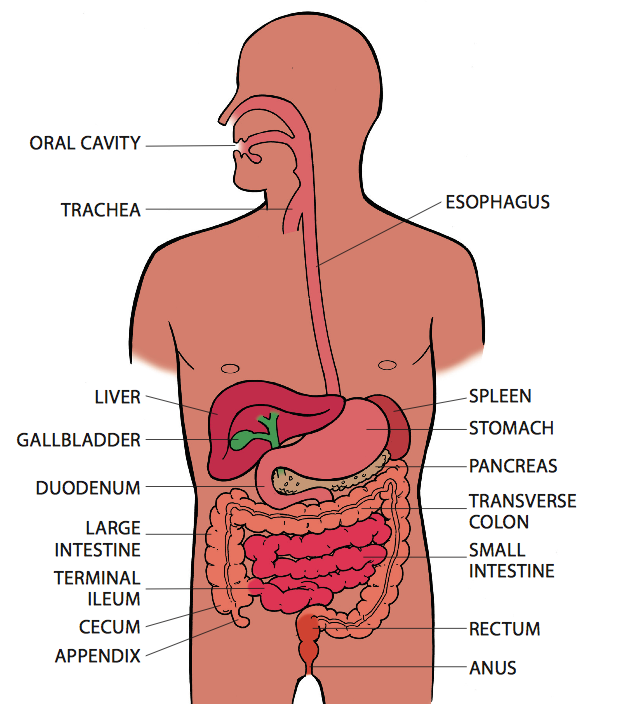 Ulcerative colitis and Crohn’s disease are the two most common types of inflammatory bowel disease (IBD). In ulcerative colitis, only the large intestine, or colon, is affected. Crohn’s disease can affect anywhere along the GI tract, “that can be starting in the mouth and winding in the bottom.,” said NY gastroenterologist Robbyn Sockolow, MD. However, Crohn’s is especially found in the last part of the small intestine, or ileum, and at the beginning of the large intestine. Also unique to Crohn’s, diseased intestine may be separated by patches of healthy, normal areas.

“For instance, you may not have the stomachaches or diarrhea, but the child may present with growth delay, fatigue, iron deficiency,” said Sockolow. “So it’s important to understand that there are subtle differences in how pediatric Crohn’s disease presents as opposed to what you might see in the adult population.” 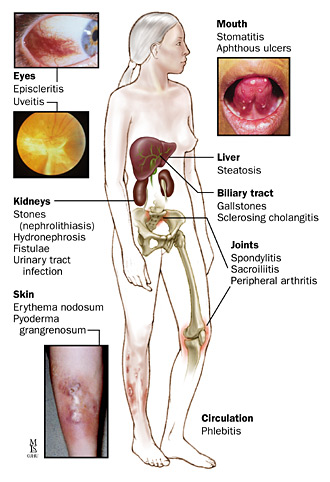 Children with Crohn’s might also experience other health issues, such as:

How can parents know when a stomachache is more than just stomachache? Sockolow advises parents and children work together to track the symptoms. They can note how often stomachaches occur, whether the child’s activity level is normal and if there is fatigue. “Encourage your child to have the feeling that they can speak about some of their symptoms, which as Nicole talked about, may be embarrassing,” she said.

Pingel added, “I think the most important thing that parents can do is be there to support their kids and offer encouragement to speak up about those symptoms.”

With this information, along with other observations that may be of concern, Sockolow said, “Share that with your healthcare provider to really give them as much information as you possibly can. Then, being able to go onto a specialist, such as a pediatric gastroenterologist, who may actually ask even further detailed questions, will allow the diagnosis of Crohn’s disease to be identified.” 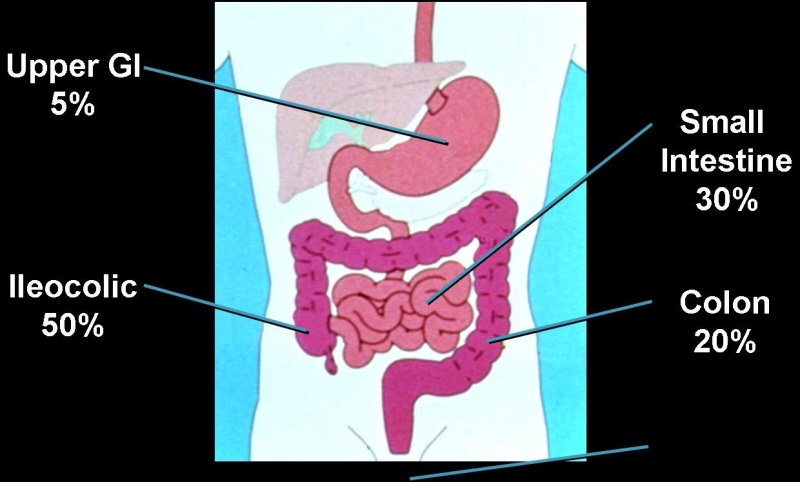 There is no single test to diagnose Crohn’s, which is why open dialogue between patients, parents and healthcare providers is so crucial. A physician may order blood test and stool samples, as well as imaging of the upper and lower GI tract, including X-rays, abdominal CT scan or MRI, which also involve drinking an oral contrast. The doctor may recommend an endoscopy, using instruments to see the interior of the colon. A biopsy, or removal, of small pieces of tissue may also be useful to determine presence of the disease.

There are five types of Crohn’s disease, depending on which area of the GI tract is affected.

Crohn’s may be managed through a combination of medications, nutritional supplements and/or surgery. Nutrition plays a crucial role in helping to control the symptoms of Crohn’s, as well as to replace missing nutrients and promote healing. A constantly inflamed small intestine may disrupt the complete digestion of food and absorption of nutrients. As a result, Crohn’s patients with significant ileum inflammation (or removal) and chronic diarrhea often experience malnutrition and vitamin deficiencies—such as vitamins A, D, E, K and B12—and may need supplementation. Individual diets should be based on symptoms (such as chronic diarrhea), location of the disease, any prior surgeries, whether there is the presence of narrowing of the small intestine, or strictures, and whether there are specific nutritional deficiencies.

“Understand that the disease may be different for everybody else, so what you might read that is appropriate for one person may not necessarily be the right treatment plan for you,” said Sockolow.

Yet it is generally recommended that Crohn’s patients eat a well balanced, nutrient-rich diet with an appropriate caloric intake. Eating small, more frequent meals may aid digestion. Patients in flare-up are encouraged to limit foods with high fiber and insoluble fiber, as well as fried and greasy foods.

“Anything that’s really rough to digest [like corn] would possibly be detrimental and cause more symptoms and possibly slow the healing process,” a nutritionist with Crohn’s based in Briarcliff Manor, N.Y., Tracie Dalessandro, told Health.com.

According to the Crohn’s and Colitis Foundation of America (CCFA), probiotics, like lactobacillus preparations and live-culture yogurt, might help aid the recovery of the diseased intestine for those who are not lactose-intolerant. However, many Crohn’s patients also have food intolerances, like lactose intolerance, so foods that cause digestive problems should be avoided. Keeping a food diary can help young people especially identify their food triggers, such as certain spices, raw fruits and vegetables, or caffeine.

During a flare-up, nuts and seeds, for example, often “don’t get digested fully and can cause more diarrhea,” said Dalessandro, who is also a nutritional advisor to the CCFA. “You want to stay away from things that are rough on the digestive system…it’s kind of like sandpaper on an open wound.”

It may be especially difficult for young children and teens with Crohn’s to stay on top of their diets due to peer influence. “Particularly, a [challenging] thing that stood out to me being diagnosed at age 14 was I wasn’t able to eat some of the same things as my peers. They were having all the great foods, like pizza and ice cream, and I was having nutritional shakes because of my condition,” said Pingel.

She also pointed out in our interview how difficult it was to explain to other teens what having a chronic illness means for patients. “Having a chronic condition, it’s very hard to communicate to your peers that you might be sick for longer periods of time or that you might look okay on the outside, but not feel great at all on the inside,” she said.

In addition to diet, addressing emotional health is also extremely important for managing Crohn’s. “I’ve been lucky in that I was diagnosed [more than] 10 years ago and only had 1 surgery. And that happened during one of the most stressful times in my life-moving 12 hours away and grad school. I think keeping your stress levels low is the most important [thing],” Pingel wrote on Facebook.

Combo of Factors May Cause Crohn’s Disease 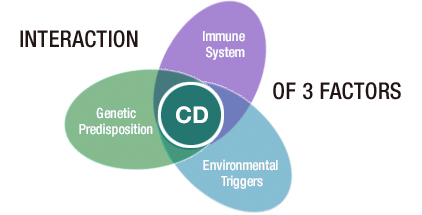 While the exact cause of Crohn’s is currently unknown, it is believed that inherited genes, environmental factors and the immune system (as discussed earlier) play a part in the development of the disease. Crohn’s tends to run in families, and having a first-degree relative (parents, sibling or children) with the disease increases the risk for developing Crohn’s. While it is more common among people of eastern European descent and Ashkenazi Jews, the CCFA reports that increasing numbers of African Americans have been diagnosed with Crohn’s in recent years.

The environment in which one lives also appears to be a factor in the development of the disease. Crohn’s is more common in developed countries, in northern over southern climates, and in urban communities compared to rural ones. Urbanization may cause changes in exposure to sunlight, pollution and industrial chemicals. Smoking and diet also are contributing factors.

According to the CCFA, as many as 700,000 Americans live with Crohn’s disease.