This morning, bestselling author Elizabeth Gilbert, who wrote the much beloved memoir Eat, Pray, Love: One Woman’s Search for Everything Across Italy, India and Indonesia, asked a favor of her readers on Facebook. Almost daily, she shares inspiration and wisdom that I and countless others feel called to share with friends. Today was no different.

Glibert shared a candid, unpolished photo of herself doing research and taking notes for her latest book, The Signature of All Things: A Novel, a novel whose historical tale spans the globe, covers multiple subjects and themes in detail and is full of fascinating characters. While describing the photo of herself at this time she said, “I see a women who is doing exactly what she wants to be doing with her life. That’s what power means to me. In fact, that’s the ONLY thing power means to me.”

Gilbert asked readers to post a photo taken at a moment when they felt like they were at their most powerful. I immediately thought of a photo that captured the changing tide of coming back into my own power once again after feeling beaten down for too long in the early years of my living with dystonia.

When I first was stricken by the debilitating neuromuscular movement disorder, I was overwhelmed by how much it stripped me of the things I had come to take for granted about my health. After years of living with autoimmune disease, I had grown accustomed to long periods of unrelenting pain and fatigue and to being felled for weeks by infections that most people recovered from in days. However, I was not prepared for the periods of complete loss of muscle control or the complete chaos of neuromuscular activity of dystonia. I was not prepared to reverse all progress I’d already fought for to live my life away from either a bed, a couch or a wheelchair. I was not prepared to feel completely disempowered, as if I was losing my last shreds of independence and self-sufficiency. 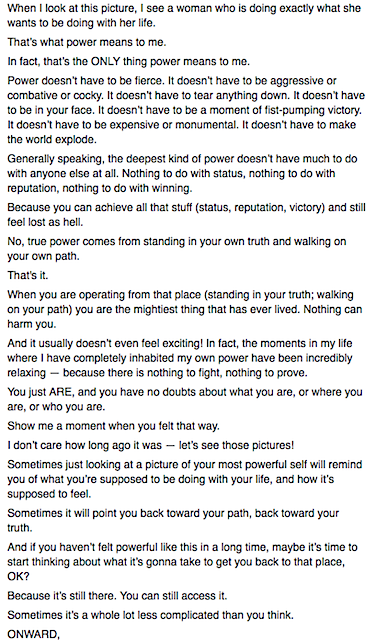 Over time, I went from the hospital to my parent’s bed to being just down the hallway. I stubbornly pushed myself out of the wheelchair, trusting that others would be able to catch me if I fell. And if they couldn’t, I would crawl until I could get back on my feet again. I grew strong and stable enough to once again shower without supervision, spend extended time away outside the house and then, to even work from home again.

When the prednisone that had finally given me some stability stopped working, and in fact, seemed to be making me worse, I began the long process of weaning myself off the medication. In a very short period, I gained more than 20 pounds, lost my job and boyfriend, and was knocked right back off my feet. If not for the support of my family and closest friends, and the hope that those 6 months of nearly flourishing (comparatively) with dystonia had brought me, I’m not sure how I would have kept up the fight to not give in wholly to the illness.

Over time, however, it grew easier to survive and even thrive with this chronic illness. I once again put focus on the food I was putting into my body—I needed all the nutrients I could get to strengthen and heal my body and brain. I forced myself to keep exercising, however ways I could. I wrote. I started dating again. And when my parents asked me to come with them more than 1,000 miles to Orlando, Fl., I realized the proper answer was no longer, “I can’t,” but “I am.”

This photo is of me in Orlando after my first swim in more than two years. While I am sporting the gradual return of my muscular abs and starting to lose the moon face of prednisone, the photo is more about a battle I was starting to win over my disease. This was me off the couch, out of the wheelchair and steadily on my own two feet again. This represented me taking my health back into my own hands, instead of being victim to the whims of dystonia.

While there have been more lows and highs in my health journey since this photo was taken, it marked the first major triumph of taking my power back. I’ve added to those triumphs since then—getting my license back, working again and getting certified to teach yoga. I finally moved out of my parents’ home again and started a life of my own with my loving boyfriend. With his support and help, I have further healed myself with nutrition (thank you, ketosis), which has enabled me to wean off a significant amount of my long-term medication and to strengthen my body, while reducing dystonia’s (and lupus’s) hold on me. Last month, I even traveled overseas for the first time in more than 15 years on a trip of my dreams.

I am growing ever closer to living the magnificent life of my own choosing. Those days when my spirit fails me, this photo reminds me of how hard I have fought to get back on my own feet again. It reminds me that I deserve the life of my choosing, (as do you!)—even with dystonia and autoimmune disease. It inspires me to look beyond the temporary setbacks and keep moving forward, one step at a time. It reminds me to nurture my dreams and to continue working toward making them true.

Thank you, Elizabeth Gilbert, for this much needed reminder.