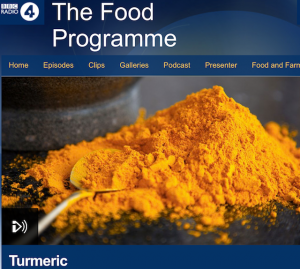 Long-time readers of the Mind-Body Shift blog know that I am a huge fan of turmeric, and I’m certainly not the only one touting its benefits. The deep orange rhizome related to ginger and known colloquially as “The Golden Root,” turmeric contains a bioactive compound called curcumin, which has been used medicinally throughout Asia for hundreds–if not thousands–of years. I’ve personally experienced its anti-oxidant, anti-inflammatory and neuro-protective benefits since I started consuming turmeric on a regular basis a couple of years ago. It is an excellent spice to use in cooking, whether in eggs made for breakfast, in the immune-boosting, anti-bacterial and anti-viral Fire Cider drink or in my Super Spicy Veggie Soup, which I make frequently during cold and flu season to use additionally as a nutritious and all-natural decongestant.

In India, turmeric is extremely popular in Ayurvedic medicine and cooking. The country produces roughly 80 percent of the turmeric eaten around the world, according to Sheila Dillon, of BBC Radio 4’s The Food Programme. This afternoon, I listened to the program’s fascinating, 30-minute episode succinctly titled “Tumeric,” which covered the plant in depth–from its historical significance to its culinary usage, as well recent research findings on its medical benefits. One could literally talk about turmeric for hours, but I’ll leave you with my major takeaways from the program:

Getting a Taste For Turmeric

• Rates of cancer are “surprisingly low in many countries that cook with turmeric,” said Dr Michael Mosley, a former general practitioner and current presenter of BBC Two’s Trust Me I’m A Doctor.

• In India today, turmeric–or haldi, as it is known there– is still taught to children as the first antiseptic one should put on a wound. according to food writer and cook Monisha Bharadwaj, author of The Indian Cookery Course.

• Consuming a couple mugs of turmeric tea (made by pouring boiled water over turmeric powder)  in the morning might boost one’s immunity.

• Turmeric is often used as balancing spice; while it does not have an especially strong flavor of its own, it helps bring other flavors together to complete a food dish, according to Monisha Bharadwaj.

• One study of 100 participants at University College London demonstrated that regularly consuming just 1 teaspoon of turmeric powder significantly affects the expression of the SLC6A15 gene, which is involved in three types of disease:
–depression and anxiety
–asthma and eczema
–cancer

• Turmeric by itself is not very stable or readily digestible by the human gut. To make it more bioavailable to the human body, it is advised to consume turmeric with food, particularly with fat. Taking it with black pepper also “seems to increase the bioavailability 100-fold,” said Mosley. Since covering the above study on his show, Mosley has begun adding turmeric to his eggs, and he enjoys turmeric latte. “I suspect if I had a specific condition like arthritis, or something like that, I might be tempted to give it a go just to see what happens. And if it is a placebo effect, it’s quite a cheap placebo is all I can say…and I’m a huge, huge fan of the placebo effect. I think it’s a great shame that we can’t dispense placebo pills because they tend to be extremely effective, particularly in areas like pain. And that I guess is the point of doing big, randomized, controlled trials.”

• We’re all different, so turmeric might work extremely well for certain sub-groups, but not others. 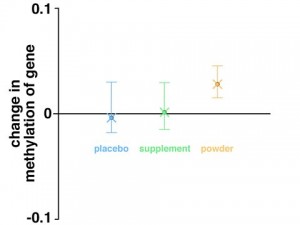 • In April 2017, the BMJ (British Medical Journal) Case Reports published an account of a patient with multiple myeloma, originally diagnosed with the blood cancer in 2008 with an initial prognosis of two to three years to live. Conventional medical treatment, including chemotherapy and an unsuccessful stem cell transplant, ultimately proved ineffective for Dieneke Ferguson. Professor Jamie Cavenagh, a blood cancer specialist based at St. Bartholomew’s Hospital in London, said he saw no benefit in giving Ferguson further, conventional therapy. Her response: “Persistence in thinking there must be a way out of it.”

Through worldwide, online support groups, Ferguson learned about research done on mice with curcumin on the blog Margaret’s Corner. With what Cavenagh cites as “rising myeloma-related protein in the blood” and “blood marrow failure with low blood counts, particularly hemoglobin,” Ferguson initiated a treatment of taking 8 mg of curcumin per day, with no conventional treatment, and she slowly began to see signs of the cancer decrease since then.

“And when you review her chart, there is no alternative explanation that you are seeing a response to curcumin, in her case, which has now been maintained for some years,” said Cavenagh, who has other patients that have taken curcumin at various stages of treatment. “This is the best response I’ve observed. And it’s very clear-cut. And, of course, one of the reasons it was clear-cut is that we had decided to stop treatment, so there was no alternative explanation. But I haven’t seen such a convincing response like that before. But clearly, this happened. It clearly doesn’t work for everybody, but it clearly also can work for some people.”

Six years later, in 2017, Ferguson’s cancer levels remained low enough for her to continue enjoying life. “Many people that have myeloma are suffering from a bad quality of life, and I haven’t got any problem with that because I can live my life,” she said. “I can do the things I wanted to.”

Clearly more clinical research is needed to study the health benefits of curcumin. However, Cavanagh said such studies are expensive and usually funded by pharmaceutical companies, which have a vested interest in not funding studies on a compound found in food.

Program host Sheila Dillon, also a multiple myeloma survivor, is living and thriving “because of near-miraculous new drug treatments for multiple myeloma,” she said. “But with good research, curcumin from turmeric could be a serious–and cheap–addition to the cancer medicine cabinet.”

Turmeric Is Proof Positive of Food As Medicine

• To wrap up my summary of this program, I wanted to share Bharadwaj’s vital perspective on cooking, nutrition and overall health: “In Indian cooking, the health and wellbeing is so much a part of cooking. You know, Ayurvedic nutrition is something that’s applied to everyday cooking. So, when we are children, we’re told about what combinations are good or what spices are good for what sort of seasons. All of those things come into everyday eating. And then, when you learn to cook, and when, even as you train, you’re always trying to put that wellbeing back into your food because otherwise there’s no point in eating…You know, I always say that these days we talk about food, and it’s concentrated in the palate; whereas we’ve forgotten what it does to the rest of us. But that’s where wellbeing comes in. And essentially we’re all eating for that; we’re not eating just to please the palate. The palate is pleased anyway because we use good recipes. But then we need to use ingredients in the right way so that they nurture and nourish the rest of us as well.”