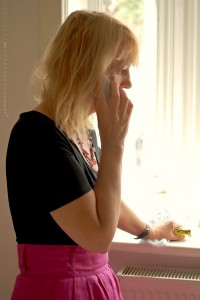 Like so many of us, I remember where I was when the horrific events of 9/11 unfolded in my consciousness. It’s not a particularly salient story, but is is mine. It began with a phone call from Sheri, my best friend at the time.

“Are you awake yet,” her muffled voice asked.

It was just barely 9. Used to my friends ragging me about being a night owl notoriously late to rise, I answered ambiguously, “Why, what’s up?”

“Turn on the television,” she commanded me. She sounded upset, which was rare from my emotionally stoic friend.

“Which channel?” I asked her, sitting up against my headboard.

“It doesn’t matter,” she said with a hint of impatience. “Just turn it on.”

She was right to question my state of consciousness. I was still in bed at my parents’ house after the umpteenth night of onset insomnia. Late mornings were a given since I had moved back home from California–wracked with crippling post-car accident pain and fatigue that eventually disabled me from my full-time job–in April of that year.

Being geographically closer to the woman who had become my dearest friend during my college years (though we had lived 3000 miles apart) was one of the few gifts I could openly acknowledge since relocating back to Connecticut. So when she called, I picked up. When she asked something of me, I obeyed.

I ran downstairs as I didn’t yet have a television in my childhood bedroom. From the living room couch, which was still 10 years from finally being replaced, I clicked the power button on the remote control. The cobwebs from sleep immediately fell away as I caught the images of smoke and chaos on the screen in front of me.

“What in the world?” I whispered, as I listened beyond the panic relayed in the news anchor’s words

“I know,” Sheri replied, with the same hushed tone.

Together, we watched–breathless–as the second plane hit.

“Oh my god,” we exclaimed in echo. “I can’t believe it.” I heard the terrible duo of terror and awe and terror reflected in Sheri’s voice, an exact mirror of my own.

I don’t need to tell you what I saw on channel after channel or what I heard from news anchor after news anchor. You, no doubt, heard and saw it yourself that day. Terrifying images and sounds were permanently seared into our brains. You, no doubt, also found yourself saying, “How can this be?” and wondering, “What happens now?”

If you weren’t in New York City yourself that day, you thought of everyone you knew there and phoned or emailed or them to be reassured that they were okay. Texting all your loved ones was impractical. You were still charged for every text message–if you even had your own cell phone. At that time, I did, as I was put on my parents’ plan to lessen the financial punishment for staying in touch long-distance when I was a college kid across the country. But most of us still used landlines. There was no Facebook yet to give you real-time notifications. There was no virtual place to “check in” to alert all your friends and family that you were safe.

When the news gave word about Flight 93 flying to–and eventually crashing in–Pennsylvania, I grew even more anxious to hear back from my longtime boyfriend who was doing a magazine internship at Men’s Health and living in Allentown. When I finally received his email and, later, phone call, he assured me he was safe, with a tone of exasperation, as if he’d been telling people he was fine all day–which, of course, he had.

Even if we did hear back from many loved ones, we wouldn’t fully know what happened on 9/11 by the end of day. I remember days of panic, worry and unanswerable questions. The weeks of countless stories sharing the horror and heartbreak. While the attacks were quickly declared acts of terrorism, the true War on Terror wouldn’t be launched for another three months, a date I noted with dread and a sense of impending doom in my journal.

We know now what a failure that war has been. We know new faces of radical terrorist groups have been birthed and emboldened by our continued occupation and destruction overseas. Vengeance is an arrow with two heads. For the near 3,000 directly killed in the 9/11 attacks (and at least another 1,000 who have since died due to toxic dust and ash exposure at Ground Zero ), far more than a million lives have been taken since the U.S. first invaded Iraq.

In the 16 years since 9/11, so much has changed–my boyfriend back then is not the man I married two years ago, and Sheri and I are no longer in each other’s lives (which still breaks my heart to this day)–but what has remained is the fact that hate long-harbored in men’s hearts does not just miraculously disappear…left to simmer and boil over, it has led to the rise of ISIS/Daesh and to the revival of blatant displays of violent and virulent white supremacy in America as we saw in Charlottesville, just two extreme examples that most easily spring to my mind. Darkness and hate did not drive out darkness and hate, just as Martin Luther King, Jr. forewarned this nation in the ‘60s. Only light and love can do that:

The ultimate weakness of violence is that it is a descending spiral,
begetting the very thing it seeks to destroy.
Instead of diminishing evil, it multiplies it.
Through violence you may murder the liar,
but you cannot murder the lie, nor establish the truth.
Through violence you may murder the hater,
but you do not murder hate.
In fact, violence merely increases hate.
So it goes.
Returning violence for violence multiplies violence,
adding deeper darkness to a night already devoid of stars.
Darkness cannot drive out darkness:
only light can do that.
Hate cannot drive out hate: only love can do that. 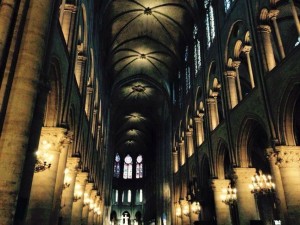 This country really came together in unity after 9/11, and it was a beautiful, wondrous and powerful force of light and goodness. We saw strangers comforting each other, neighbors helping neighbors, and communities combining their gifts, resources and strengths. We spoke to our unity, claiming we were all New Yorkers.

In recent years, however, our solidarity has splintered; not only have nations been encouraged to rise against nation, but neighbor has been pitted against neighbor, friends have turned into foes, and families are fracturing more than ever.

“You know, there’s more conversation about what divides us than there is about what unites us,” said spiritual author Marianne Williamson said in the ongoing summit 11 Days of Global Unity.

And yet…we see glimmers of our immense capacity for generosity and compassion again in the most recent wake of natural disasters across the nation. I encourage us to continue digging deep to express the full well of empathy and kindness we can feel for our fellow men and women. I challenge us to do even more to help one another and find common ground in order to combat the divisiveness that has splintered the nation even further over the past couple years.

The separation in our society, Williamson suggests, has resulted from us taking the quintessentially American “notion of the rugged individualist” to an extreme that it is “at the expense of the collective good.” She said that the uniting that the ‘united states’ of America is struggling today deals with “uniting intellectual states, emotional states, philosophical states, religious states.” We have fallen into the trap of focusing on our wants as individuals over and above what is beneficial and necessary for us as collective.

Williamson points out that there needs to be a “sacred balance in a civic sense”–conceptualized by our country’s foundational motto ‘E pluribus unum,’ or ‘out of many, one’–that takes into consideration both individual liberty and what is good for the collective. “What is happening in the United States today is that people are overemphasizing one at the expense of the other,” said the spiritual teacher. “Some people just want the oneness–but when they’re talking about the oneness, what they mean is ‘one with people like me.’ Too many people are thinking in terms of the oneness of America as ‘We should all be this’–in too many cases, in really intolerant ways…But then on the other hand, there are those who emphasis diversity at the expense of our unity too. And the ‘e pluribus unum’ means that both are important.”

I sincerely believe that we–as individuals and as a collective society–must be willing to peek into the shadows, to recognize and call out the darkness and sites of emotional injury and spiritual illness in our communities and in each one of us. This means acknowledging and addressing our fears and grievances with both honesty and compassion. An authentic desire to really understand ourselves and identify where our pain comes from is what will truly and wholly open us up to listen and learn from one another. To prevent the ‘karmic blowback’ of throwing the two-headed arrow of fear-driven discord, we must be willing to reject the polarizing name-calling and to shed our judgments against others who have the “audacity to disagree” with us.

With a sincere desire to learn and understand one another, we open our hearts to love and harmony that pervades the collective consciousness so deeply that we can’t help but see ourselves–and act–as One. “We are united because, on a spiritual level, we are one,” Williams said. “But our task living on the earth is to bring our external, material conditions into harmony with our internal truths.”

We must be willing to holding the dark and uglies of mankind to the light. We must commit to fully acknowledging their origins and complexities, and to make amends for any role we–both collectively and individually–play in the perpetuation of fear and hate that leads to violent vengeance and stifling oppression we commit against one another. It’s the only way we will ever be able to acknowledge and heal our wounds and move forward from the pain.

We all do better when all of us do better. For what is done to one of us is done to us all. So let us, together, step further into the light in truth and love.