Since experiencing his own dramatic transformation from addict to survivor largely with the help of yoga and meditation, Tommy Rosen has spent the last two decades as an addiction recovery expert and yoga teacher, certified in both Hatha and Kundalini Yoga. With 23 years of sobriety under his belt, Rosen has become a trailblazer and leader in the world of Yoga and Recovery. He founded Recovery 2.0 to share “the gifts of yoga and meditation with people in recovery from addictions and with others who desire to get past any hurdle that stands between them and their happiness.”

The month of September is National Recovery Month, a time to bring awareness to the addiction treatments and mental health services available to help those with mental and/or substance abuse disorders. In 2013, 22.7 million persons aged 12 or older needed treatment for an illicit drug or alcohol use problem, according to the  2013 National Survey on Drug Use and Health. The most common substances for dependence or abuse were marijuana with 4.2 million people, painkillers with 1.9 million, and 855,000 reported cocaine abuse.

Rosen was 22 when he hit rock bottom in his addiction to drugs. In 1989, he went to a rehab facility in Minnesota that espoused the 12-step program. “The idea of a life of recovery was presented to me,” he said in a recent interview. “For all intents and purposes, it took. I got out.”

Two years, later he moved from San Francisco to New York. In his new hometown, Rosen was drawn to walk into a yoga studio off the street. He found teacher Janet McLeod elegantly and gracefully leading an Iyengar yoga class. As a physically minded youth, Rosen was drawn to both her flexibility and strength.

“Her movement was an outward representation of freedom,” Rosen said. “Since I was 2 years old, I have felt anxiety and disease. It was literally in the tissues of my body. She didn’t have that. I wanted that.”

Growing up, Rosen found sports to be his saving grace. Loving movement, he played baseball, football, golf, basketball and tennis. “But I was never able to reach my potential as a kid because of my diet,” he said.

How Food Affects The Way You Move

Rosen sees a direct relationship between food and movement. “There is a direct connection between food and the way that we move. The food and water we take in will fuel all the activity of the mind and body,” he said. “If we feed ourselves a lot of toxic foods that are hard to digest, our body is taxed by the energy it needs to expend on practice.” Tension patterns in the body form as a result.

Rosen encourages people to pay close attention to their diet. He admits he never ate a salad until he was 18 years old. “My childhood was one sugar event to the next—an absolute abomination,” he said.

He describes the primal relationship between comfort and sugar. “When you feel like your needs are not going to be met, you go right to the primal that makes you feel more comfortable,” he said. “I was a coca-cola addict long before I became a coke addict.”

As a result, Rosen was sick a lot as a kid and became really weak. “Addiction is an opportunistic disease. It preys on weakness,” he said.

Rosen feels that re-mineralization of the body is critical to human beings. “We need minerals to survive and to thrive,” he said. People with drug, alcohol and other addictive behaviors deplete themselves drastically from minerals, according to Rosen.

He stresses hydration with clean water. “Hydration has everything to do with salt. If you don’t have the right balance of salt and water, you won’t be properly hydrated,” he said. “Grab a pinch of Celtic sea salt and put it in your water.”

Rosen believes in bio-individuality, that there is no sole diet for humanity. However, he encourages eating whole foods, live foods, salads and lots of different-colored vegetables. He believes these promote proper enzyme activity, mineralization and healthy flora in the intestine.

“The idea is to get as unprocessed as possible in all the food that we eat,” he said. “Practicing yoga doesn’t mean you have to be a vegetarian. If you’re eating meat, you want to source from grass-fed, organic, free-range pasteurized animals.”

Rosen feels that it is inevitable that one’s diet changes with serious, daily yoga practices. “You can’t tolerate the same injustices,” he said. “You have more awareness.”

How Awareness Guides the Movement from Addiction to Recovery

Rosen also believes the movement from addiction to recovery is a movement from being less aware to being more aware. “In addiction, you’re being driven by a need…an itch that you couldn’t scratch. With the phenomenon of craving, your principles will go out the window,” he said. “Anyone who enters depraved, addicted state, you’re only hearing one voice without in you. You miss out on the awareness of others.”

In 2003, Rosen found kundalini yoga, which is known as the yoga of awareness. Under the apprenticeship of Guruprem Singh Khalsa, Rosen was able to truly move beyond his addiction and leap into formally bridging yoga and recovery.

“Through posture, through mudra, through chanting and meditation—all of it together forms the basis for yoga that delivers you to your own sense of infinity and divinity,” he said. “It brings you to an awareness of your true self. It’s using the body as the vehicle itself to open enlightenment.”

Describing his first yoga experience in his upcoming book, Recovery 2.0: Move Beyond Addiction and Upgrade Your Life, Rosen writes:

“The feeling was electric-energy humming through my body. I felt like blood was pouring into areas of my tissues that it had not been able to reach for some time. It was relieving and healing, subtler than the feeling from getting off on drugs, but it was detectable and lovely, and of course, there was no hangover, just a feeling of more ease than I could remember. I felt a warmth come over me similar to what I felt when I had done heroin, but far from the darkness of that insanity, this was pure light-a way through.”

In an interview with MindBodyGreen, Rosen says the energy of addiction and all its causes lives in the body. “It is with us all the time no matter what until we do the physical work necessary to get it out of our tissues,” he said. “This requires more than putting down drugs and alcohol. This requires a scientific approach developed over thousands of years and it is called yoga.”

Rosen has introduced many people to the gift of kundalini yoga. “It works to rebuild the nervous system, to build and recalibrate the endocrine system,” he said. “It deals a lot with the breath and nadis—the energy channels of the body.”

He has learned from teachers in vinyasa, hatha-based movement in accordance with breath, as well as the strong breathing practice of pranayama. “I believe every form of yoga has something the other forms don’t,” he said.

Rosen appreciates the integration, having found the combination of Kundalini and Ashtanga or Iyengar hatha yoga to be especially power tools in recovery. “Warm someone up with some vinyasa flow, then drop into kundalini yoga and kriya,” he said.

Rosen teaches regularly at yoga conferences and festivals, including Wanderlust, Hanuman and Sun Valley. “Nowadays I am traveling so much so I don’t have a set of classes in Los Angeles, my hometown,” he said. “People come to my workshops or retreats. People find me from the Recovery 2.0 practices.”

Rosen shares yoga at recovery conferences and is “the weird guy bringing recovery into yoga” when he speaks at yoga and wellness festivals. “Now I am bridging two worlds—people from both yoga and recovery,” he said. “I hope that I have opened people’s eyes to a more robust understanding of addiction and a more holistic understanding of recovery,” said Rosen.

Move Beyond Addiction and Upgrade Your Life 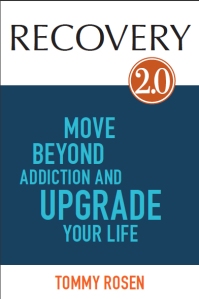 Rosen’s latest book Recovery 2.0: Move Beyond Addiction and Upgrade Your Life will be released on Amazon on Oct. 21 of this year. The book takes a deep look at all the practices and behaviors that it takes to thrive in recovery—including grounding practices like yoga and meditation.

“Readers can expect to be offered a super hopeful look at the transformation recovery is,” he said. More of an inspirational book than a how-to, Rosen shares a lot about his personal story of facing his family history, releasing the past and understanding why you behave the way you do.

“I hope this is a shame-buster for people. It really gives you a cutting-edge, new perspective on the 12 steps program,” he said.

Rosen stresses thinking of recovery—and living in general—in terms of one day at a time, a concept he describes as a “spiritual treasure trove.” He says one day at a time is, “the way that things are organized here. When I wake up in the morning, I have to do certain things. I like to cover myself for the day. It sounds so simple but there’s something powerful about really understanding that your protection, your coverage, if you will, lasts for 24 hours.”

He admits there have been plenty of days where he missed practicing the behaviors of protection. “Those days weren’t as good, weren’t as centered, weren’t as clear and purposeful as the days when I covered myself,” he said.

Though he’s been sober for 23 years, Rosen believes anyone can fall off. “If I got away from one day at a time, put a distance between me and the practices, move away from my center—somewhere down the line, I could fall back into energy and behaviors that don’t serve me,” he said. Your life returns to being disconnected and confused. When this happens, the negative behaviors grow more attractive because they soothe you. Rosen’s new book helps people understand the pitfalls of recovery and how to navigate them well.

A key component of living one day at a time means addressing things, including challenges, as they present themselves. Some might need to get some therapy to figure out what is going on or initiate a serious conversation to open up the lines of communication with a partner, Rosen says. “Things have to be dealt with in real-time, or things pile up—you may fall of your diet and spending time with children and facing life becomes tough.”

“People start to realize, ‘I really am extraordinary. I really have gifts. I was just misdirected. My energy was going in the wrong direction’,” Rosen said. “When people pull it together, it’s really amazing. The shame and guilt fall away and people become more empowered.”