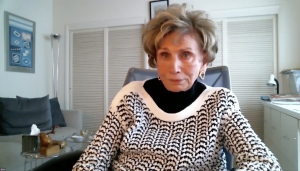 It’s been a tremendously empowering and emotionally stirring week of Sounds True’s The Healing Summit. At the start, Peter Levine, PhD, coached listeners on how to “tune in and drop into” the body–through the gentle presence, compassionate awareness and rhythmic movement of Somatic Experiencing–in order to dislodge the “tremendous compression of survival energy” locked into the physical form by trauma, allowing for new visceral experiences that  ‘restore goodness’ and engender healing. Dawson Church, PhD, helped summit participants to tap into the mind-body’s innate ability to heal from the traumatic impacts of painful experience and memories with the hands-on Emotional Freedom Technique (EFT). And Tuesday, clinical psychologist Edith Eger, PhD shared her optimism and grace to inspire people to find their own resilience and perseverance through trauma.

At 17, Eger was ordered to dance for Dr. Dr. Joseph Mengele at the Auschwitz concentration camp during World War II. After surviving the Holocaust, she went onto study psychology and became a specialist in treating patients living with PTSD (post-traumatic stress disorder). However, it wasn’t until she began working with Vietnam War vets that Eger realized she needed to confront her own past trauma of being arrested with her family by the Nazis in Hungary 1944 and of enduring the inhumanities and tragedies of the Polish extermination camp where they were eventually sent.

“[The famed Jewish psychotherapist and author Viktor Frankl, who worked as a therapist in the Nazi death camps] is the one who truly allowed me to give myself permission to express and tell people where I’d been,” Eger said in her interview entitled “To Be or Not to Be–Victim or Survivor?” for The Healing Summit. “So, I had my secret–and it’s in my book–and then, the secret had me. Because when I was working with the Vietnam vets, that’s when I realized that I had the 16-year-old girl hiding there, and I had better pay attention. And I better start really doing my own work–and I’m still at it.”

Eger related how people often praise her for “overcoming” the horrors of the Holocaust, but she insists, “No, I didn’t overcome, I came to terms with it. I don’t live there. I don’t live there. I’m reminded almost every day when I go to a street where they have barbed wires–I’m already there in Auswitchz…but it doesn’t last.”

She also let go of the burden of perfectionism. “I accept that I’m going to make mistakes, and that’s okay because I’m human,” Eger said. “Underneath the anger, as you know, is fear…the fear does not really coexist with love.”

In order for her to face the fear and anger she felt about the Holocaust, Eger realized that she needed to return to Auschwitz as an adult. And through the process, she also learned something about forgiveness–and peace. Yet she resists the oversimplification of praise bestowed upon her for being “a good person” because she forgives the Nazis.

“No. It’s not about that,” she said. “Revenge gives me a satisfaction; but I have to go back to that lion’s den, and look at the lion in the face and reclaim my innocence and not allow anybody to take residence in my body. Because otherwise, I would still be a hostage of the past.” 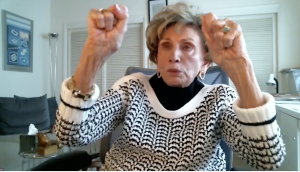 No longer a hostage of her past, Eger seeks the goodness life has to offer. “So I want to have joy. I want to have passion. I want to be a good role model of love and passion and joy–that I’m born with,” she said.

“So it’s really letting go of what I should be and what I was asked to do in order to be loved–that’s not love. That’s being brainwashed and manipulated,” Eger explained.

“I like the whole idea of unconditional love,” she said in summary. “Love is not what you feel but what you do.”

There’s still time for readers to view the encore presentation of the summit here.