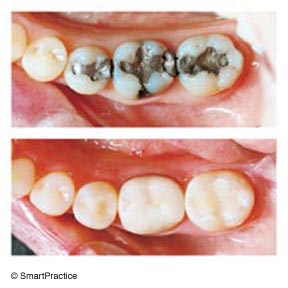 Most of us at or above a certain age can count at least one “silver” filling in our mouth from getting cavities when were kids. And really, when one grows up with the option of sugar-laden cereals for breakfast, like Froot Loops, Cap’n Crunch and Apple Jacks, it’s more surprising not to have a mouth full of cavities. But today we’re not talking about the blight of sugar, unhealthy bacteria and plaque. We’re instead focusing about the more insidious dangers of those silver-colored amalgam fillings in our mouth.

What we call silver fillings are actually an amalgam of several metals, including copper, tin, zinc and silver. “Fifty percent of amalgam fillings is mercury,” said Dr. David Villareal, a holistic dentist in Newbury Park, Calif, in a recent interview.

Used for more than 250 years in dentistry, mercury amalgams are fast, cheap and easy to use, said Villareal. Unfortunately, mercury is also one of the more toxic, natural substances in our environment. While the FDA still holds the position that mercury tooth fillings are safe, mercury is a known neurotoxin and endocrine-disrupter in humans, and it can stress and suppress the immune system over time. Scientific studies have linked mercury exposure to autoimmune disease (like ALS and multiple sclerosis), several cancers and increased risks for cardiovascular disease and vision loss, as well as neurological problems ranging from Autism to Alzheimer’s.

In 2010, research findings from Northeastern University published in the Journal of Alzheimer’s Disease showed that long-term exposure to mercury can cause neurological problems and pathological changes to the brain that are normally associated with Alzheimer’s. Pharmacology Professor Richard Deth and German colleagues found that mercury binds to selenium, reducing the bioavailability and efficacy of this antioxidant in the body to suppress damaging chemical reactions to the brain. The oxidative stress of mercury in the body causes nerves to cease properly functioning and leads to cognitive impairment and cell death.

“Mercury is clearly contributing to neurological problems, whose rate is increasing in parallel with rising levels of mercury,” said Deth in Northeastern University News.

Mercury evaporates at room temperature, and it enters the body, as with mercury fillings, in the form of a gas. When mercury crosses the blood-brain barrier, this gas can also trapped inside the brain and accumulate in toxicity over time. When mercury metal, amalgam fillings are implanted into the human teeth, they release vapor into the body, which accumulates the longer one has those fillings in the mouth. It is believed that mercury vapors seep from these fillings constantly, while chewing releases an even larger amount of these toxic fumes. 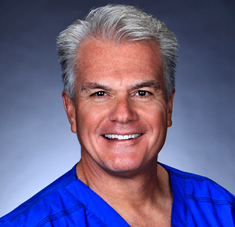 Villareal has seen the innate ability of the human body to handle a reasonable amount of toxic load reach a tipping point in many of his patients. These patients may present with autoimmune disease, cancer, Chronic Fatigue Syndrome or Alzheimer’s, he said. They ask the holistic dentist why they are only getting sick now, despite having had mercury fillings in their mouths their whole lives.

“Stress is the number one cause of any autoimmune disease,” Villareal explained. With the inundation of both physical and emotion stress in our daily lives today, the compromised body has an increasingly difficult time keeping the toxic effect of mercury at bay over time. “When a traumatic incident occurs, like a death, divorce or auto accident, the body sometimes says, ‘I can’t take it anymore,’” he said.

Villareal observed that how the body deals with toxins really depends on its reactions to stressors. Someone can have a mouth full of silver fillings and physically feel fine, while another patient can have just one silver filling and be extremely sick. “We know there are certain factors that play into more mercury leaching into the body: the number of fillings in the mouth, the age of the fillings, the grinding of teeth, diet and the acid we put in the mouth through carbonated drinks,” he added.

While some dentists and health educators promote removing mercury amalgam fillings across the board, Villareal takes a more patient-centered approach to advocacy. “My belief and philosophy is to educate people on the pros and cons of amalgam filling removal,” he said. “With my patients here, it’s all about education. It’s their body, and I have my patients decide. You intuitively go inside yourself and decide what’s best for you.”

For those who do elect to have their silver fillings removed, Villareal’s BioDental Healing practice takes all precautions possible. It is believed that mercury vapor release is at its greatest when fillings are put in and taken out. “Make sure the dentist is using a dental rubber dam that isolates the tooth and minimizes the amount of mercury vapor released.” 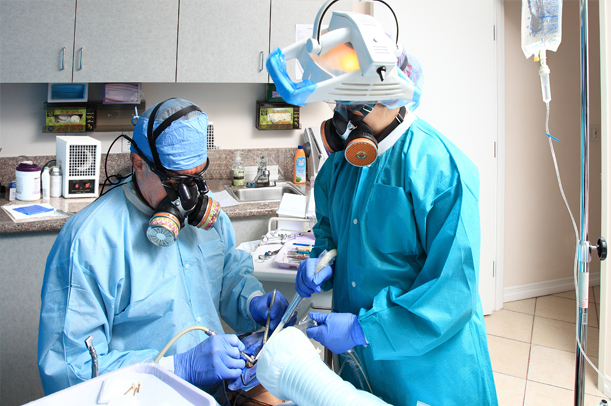 Villareal compares his practice during filling removals to a HazMat response team. “We’re completely covered. We wear special air filters and use oxygen masks and protective eyewear on patients. We drape each tooth so everything that comes out goes into the rubber dam,” he said.

The rubber dam isolates the teeth being worked on, preventing particles from getting into the soft tissue of the mouth. Dental air vac suction is placed right by the patient’s mouth throughout the procedure to absorb mercury gasses to protect the patient, dentist and assistants. Oxygen masks worn over the nose also serve as an important barrier to eliminate the risk of breathing in mercury vapor. Ionizers remove free radicals in the air, and teeth are disinfected with ozone prior to a new filling being placed. The practice has a special water filtration system to separate out amalgams to protect the local water system and oceans for mercury exposure.

The patient also receives intravenous vitamin C administered by a naturopathic doctor. “It helps tremendously in protecting the body by acting as chelating agent,” said Villareal. It removes heavy metals from the bloodstream, as well as boost glutathione, arguably the body’s most critical antioxidant and master detoxifier.

Prior to replacing silver fillings, Villarreal performs a blood compatibility evaluation with patients on the dozens of different filling materials now available. After blood tests are sent to a Colorado Springs lab, patients receive a list of composite materials to which they are highly, moderately and least reactive.

“There are a lot of composites, or white fillings available, but they are not all created equal,” said the holistic dentist. The newer silver fillings, for example, release mercury 50 percent higher than the older ones, according to Villareal. “We choose the materials that best support your body’s natural power to heal,” he said.

In holistic biological dentistry, bio-individuality is emphasized and dentists look at all the factors that may contribute to a patient’s health—including stress, environment and diet. Villareal pointed out that soil depletion is robbing many vegetables of essential nutrients, for example. He encourages patients to eat a lot of protein, a lot of vegetables and greens. “I don’t recommend fish because of the mercury content,” he added.

“The body is amazing instrument that can heal itself without burdening itself so much with heavy metals in the mouth and bad diet,” Villareal said. While removing fillings isn’t a guarantee of recovery from serious illness, he has seen thousands of patients helped.

Villareal emphasizes the relationship between dental health and disease in other parts of the body. He calls the separation of oral health from the health of the rest of the body the “decapitation” of Western medicine. Chinese medicine, which has been around for thousands of years, has long recognized the connection between the teeth and the organs. According to Villareal, Chinese meridian points have been shown to connect each tooth to different organs in the body.

“If you have problems in the organs, it affects the teeth; it goes both ways,” he said. “That’s why vets check the horse’s mouth first before examining the rest of the animal. But we don’t have physicians looking into their patient’s mouth during their yearly physical visits.” He says only one health insurance company looks at gum disease, though the American Dental Association (ADA) now recognizes that gum disease is associated with a higher risk of diabetes and stroke. 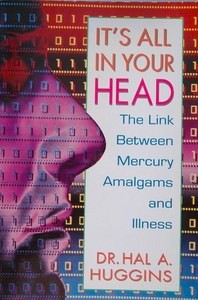 Villareal began practicing conventional medicine in 1984. However, his outlook and approach transformed in 1992 after a patient gave him a copy of the book, It’s All in Your Head: The Link Between Mercury Amalgams and Illness. Dr. Huggins’s book details extensive research revealing a link between mercury toxicity and neurological and immunological disease that made Villareal rethink the health effects of metal amalgam fillings.

“I couldn’t put the book down; it made a lot of sense to me,” he said. He then went to Colorado Springs to receive training in holistic dentistry. “That year I took all my mercury fillings out.”

While Villareal acknowledges that removing mercury fillings can be expensive, he points out that managing a severe, chronic disease can be a heavy financial burden as well. “Dentists make crowns out of silver fillings, and it lasts a long time. A lot of mercury fillings are very large, partial or full crowns, so removing them can be costly. On the other hand, if you are sick, you’re going to end up paying a lot of money to feel well as well. At least if you remove the silver fillings, you don’t have that toxic burden of mercury anymore.”

The dentist estimates that he’s removed approximately 20,000 removals mercury fillings in the past 24 years. “I wouldn’t be doing this type of dentistry if I didn’t see it helping people,” he said.

You can learn more about Villareal’s practice of holistic dentistry at BioDentalHealing.com.