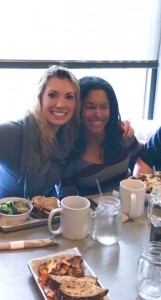 It would be an unequivocal understatement to say that the month of January has been a momentous one for me in my health journey. It was during the second week of January some 17 years ago, when I got into the bike-car accident that resulted in muscle tears, bone bruises and a vicious cycle of chronic pain, insomnia and stress that eventually triggered the full-blown manifestation of autoimmune, rheumatic disease in my body. It was also in mid-January, ten years later, when I begin having the surreal and scary episodes that would eventually be explained by the diagnosis of a neurological movement disorder called dystonia. It would sadly take another seven years to the month–just yesterday, in fact–to come face-to-face with another person living with dystonia, but I am so grateful this day came when it did. I’m so thankful for the unexpected gift of friendship and community that comes from living with chronic illness.

There is something incredibly self-affirming about having other people in your life who understand the trials and tribulations, in addition to the well-deserved triumphs, that are par for the course when living with chronic disease. In the early days (and years) of living with autoimmune disease, it seemed impossibly difficult for me to explain to people what it was like to be in physical pain every minute of the day, to be literally unable to sleep for more than a couple hours at night for weeks and months on end, and to go from being able to tirelessly hike tricky, mountainous terrain to not being able to walk to the end of my short driveway without resting. How could you adequately describe what it was like to wake up with an entirely new buffet of mysterious and debilitating symptoms, adding to the already baffling array of symptoms you’d been slowly accruing over the weeks, months and years? How did you put into words how confusing it was to have symptoms that couldn’t be satisfactorily confirmed by an external blood test or imaging, to be unable to put a name to a specific diagnosis, or, even worse, to have a doctor maddeningly dismiss your symptoms as being mostly psychosomatic – doctor code for “this very real and physically manifesting disease is somehow, mostly, if not ‘all in your head’”?  How did you sufficiently express the frustrations and fatigue of going from doctor to doctor, from allopathic (or Western) medicine physician to complementary and alternative (CAM) medicine practitioners of all stripes, praying someone had the answer to “fix” you, or at the very least to be able to alleviate your suffering? How did you sufficiently explain the disappointment when you realized these doctors didn’t have all the answers, and in many cases, knew far less than you did about what it really was like to endure a particular manifestation of disease? Who did you then turn to for knowledge, support and encouragement?

Last week, a powerful 2016 TedTalk resurfaced that described how exhausting it was to try to explain: What happens when you have a disease doctors can’t diagnose. In this talk, Ted Fellow Jennifer Brea, who lives with myalgic encephalomyelitis AKA Chronic Fatigue Syndrome, describes the resilience of patients like us, living with so-called invisible diseases, who’ve had to become their own best healers, with the help of the internet and an incredibly empowering online think tank. In these mediated communities, like LiveJournal back in the early 2000s and in Facebook support groups now, people who have struggled just to leave the house have been able to find solidarity, community, empathy and strength from others who truly understand the journey, because they are on it too. Even though we have spent extended periods of time feeling alone and like we’re medical anomalies and freaks, we eventually come to discover there are others like us out there–some of whom have been living with a certain set of symptoms longer than we have, some of whom have more mystifying journeys than even we do, but all of whom have a unique story to share that can teach us more about ourselves.

Without this online community, it is extremely doubtful that I would have figured out how to get myself off the couch, out of the house and back into the world, to the degree that I have been able. Without this resourceful group of people rallying behind me, I would have never discovered the wonders of CAM and the holistic health model; researched the amazing healing potential of nutrition, movement and art; nor studied and experienced the miraculous-seeming mind-body medicine and practices, like Ayurveda, chiropractic, massage therapy, meditation, qigong and tai chi, and yoga. Without this beautiful and diverse fellowship of folks online, I would have never learned how to be my own health advocate, to keep track of my own symptoms and progress, to do my own research and experiments, and to help other healthcare practitioners identify when something new–like dystonia–manifested in my body that could be and needed to be addressed and treated. I certainly wouldn’t have developed the courage and confidence to share my story and to try to be a guide to others who came after me on this journey. A part of me wonders if I would have survived almost two decades of chronic illness if not for finding my tribe?

Honestly, I really don’t have to think about that question for long before remembering I haven’t come this far on my own. Not only have I had the loving support of my family and friends, I’ve been extraordinary blessed by the insights and inspiration of so many other folks who’ve also had this path of living with chronic health conditions sprung upon them. There are so many amazing and resilient folks out there, each with his or her own story to tell about how they have survived, endured and even thrived. They just might not yet have become visible to you yet. They haven’t yet had an opportunity to voice their own story.

I marvel at the chances I get to physically meet people who are courageously confronting the obstacles and setbacks life may try to throw at them. My new friend Jennifer is one of those people. We came to be introduced through a dystonia support group on Facebook, the first place I turned to when I initially experienced the unsettling episodes of having my muscles contract, give way or contort outside of my control. Finding other folks who actually knew what dystonia was and what it felt like to live with it made the journey seem far less frightening. The knowledge, support, encouragement and inspiration I’ve found from the online movement disorder community once again leaves me at a loss for words–this time for how incredibly grateful I am to have found them and for their grace and generosity in continually reaching out with curiosity and compassion toward me.

Jennifer contacted me Thursday to tell me that she was visiting my part of Connecticut for the weekend and would like to connect. Sharing a passion for movement that makes us feel more in control of our dystonia, we initially planned on doing a yoga class together. Unfortunately, that didn’t work out for this weekend, but we and our men got together for lunch on Sunday instead. 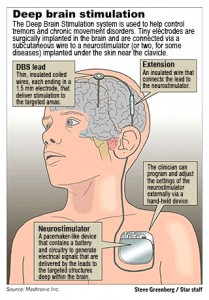 While we are the same age and both grew up in the Northeast, our stories are distinctly unique. My dystonia was triggered by autoimmune disease (itself triggered by the trauma of an automobile-related accident in college) seven years ago. Her condition first surfaced 20 years ago, but was triggered in its full-blown manifestation after she received In Vitro Fertilization, or IVF treatments. I found relief after discovering my condition was dopa-responsive, meaning that I saw improvement in my symptoms with a medication that increases the amount of the neurotransmitter dopamine in the body. Dopamine plays a vital role in the way the brain controls movement. Jenn, on the other hand, needed a surgical procedure called deep brain stimulation (DBS) in order to uncurl her contorted body. A battery-operated device, or neurostimulator, was placed under the skin around her abdomen that connects to and helps control electrodes placed on either side of her brain. Neither my medication nor Jenn’s DBS are a cure, but the improvement to quality of life has been miraculous for us both. Regularly moving and strengthening our muscles through exercise has been vital for giving us both more control over our bodies.

It was so motivating to meet another woman living with the same disorder who is also doing her utmost to live life to the fullest. Jennifer was forced to retire from her high school position of teaching literature and writing–another interest we have in common. Like me, she tutors part-time and tries to lead as full a life as possible pursuing her passions, while doing our best to keep dis-ease in check.

We quietly shared bits of our stories in between a normal social gathering of couples meeting for lunch yesterday. Our romantic partners also work in similar fields and hit it off well. Jennifer and I both found ourselves looking at each other with curiosity and wonder–here’s someone who can bear witness; here’s someone else who can truly understand. I look forward to learning more of her story and spending more quality time together in the future. Friendships and community uniquely united by the shared bond of facing adversity is one of the unexpected, great gifts that comes with living with a chronic health condition.