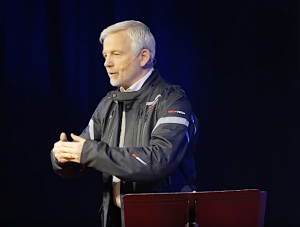 At age 60, Bob Kuhn decided to tackle the 50cc Quest, driving his motorcycle 3800 km from San Diego, Calif. to Jacksonville, Fla. in just over two days. In a recent TEDx Talk, the lawyer, who lives with the neurodegenerative movement disorder called Parkinson’s, explained why he decided to take the grueling challenge to cross the United States in 50 hours or less. “In one word: Adventure,” he said. “It was Helen Keller who said, ‘Life is either a daring adventure–or nothing at all.'”

Seven years prior to that cross-country trip, Kuhn says he embarked on his most challenging adventure–one that began with a seemingly innocuous, intermittent twitch of his index finger. A happily married father of three, Kuhn was ‘living the dream,’ with a successful law practice, great friends, and rewarding pastimes. “Little did I know that my comfortable, contented world was about to collide with a much different future,” he said.

As his father had been recently diagnosed with Parkinson’s, Kuhn decided it was wise to make an appointment for himself with a neurologist. He was floored when the doctor informed Kuhn that he too had the disease. He immediately fell into what he describes as “a dungeon of darkness and fear.”

The Challenges of Life With Parkinson’s Disease

In Parkinson’s Disease (PD), dopamine-producing brain cells (or neurons) in the substantial nigra region of the mid-brain begin to degenerate or die. Here in the basal ganglia, the neurotransmitter dopamine plays a vital role in  motor control and the learning of new motor skills, as well as in motivation and mood. With reduced levels of dopamine, people with PD often experience tremor at rest, muscle stiffness, impaired gait and balance, the loss of automatic movements–like blinking, smiling, or swinging the arms while walking–and bradykinesia, or the slowing of movement.

Kuhn said the twitching in his finger eventually spread to both hands and down his legs. He noticed that when he walked, his right arm stayed still while his left arm “marched on.” As so many people living with this neurodegenerative disorder of the central nervous system, Kuhn also developed illegible writing, speech changes and a loss of the sense of smell, as well as insomnia and daytime fatigue. The sadness, anxiousness, irritability, fear, discouragement and hopelessness he began to feel is also common to PD, due to decreased dopamine levels resulting in a diminished ability to initiate behavior and experience pleasure.

Kuhn said in his TedTalk that it would have been easy for him to succumb to depression, isolation and bitterness. Yet he found that there was one thing that he could control that Parkinson’s could not. He explains with a quote by Viktor Frankl:

Everything can be taken from a man but one thing: the last of the human freedoms—to choose one’s attitude in any given set of circumstances.

Every one of us is dealt a seemingly random hand of chance cards in life, Kuhn explains. Whether we must face a difficult relationship, job loss, the death of a loved one or health challenges, we each must confront a variety of challenging circumstances on this journey from the cradle to the grave. “Confronting an overwhelming fear for the future, we pursue security and want to maintain control over our circumstances,” he said. “Yet, we each will face circumstances we can’t control.”

Facing Adversity With An Attitude of Adventure and Optimism

How we cope with the impossible circumstances that come before us ultimately determines the quality of our lives. Kuhn reminds us that each one of us is given ‘one wild card’ among the hand we’re dealt. “When facing the most aggressive of adversaries, we can still choose our attitude,” he said.

By this, Kuhn doesn’t mean making “phony, feel good promises or platitudes.” Instead, he refers to consciously facing life’s ups and downs with positivity and resourcefulness. To do this, we must choose to be active participants in our lives; not simply doomed spectators to life’s circumstances. As active participants, we work toward what we truly want for ourselves–one small step and one decision at time.

“I believe that we want to live full, purposeful lives,” he said. ”That we want to have the dreams we had when we were children; the adventures we anticipated then.”

With trembling hands, Kuhn acknowledged that Parkinson’s is a serious reality of his life. However, he said he can decide to embrace the adventure it presents. He views each day as “an opportunity for me to choose that adventure.” He believes there are two important reasons to face life in this bold-hearted way.

One reason is because it builds courage, strength and resilience in the individual. Kuhn spoke to the multitude of studies suggesting that actively cultivating a positive outlook can be beneficial for patients’ quality of life by boosting the immune system, decreasing stress and countering depression. He said that people with a positive attitude “live longer, have a higher quality of life and do better facing major health challenges.”

Living with passion and optimism also offers us the hope that we grasp for in our moments of despair. In his TedTalk intro, Kuhn recounts one leg of his motorcycle trip, when he was riding too fast in the dark fog before dawn, down Interstate 10. Jostled by the tunnel of wind created by long-haul truckers barreling past him, he clutched the handlebars of his motorcycle “in a death grip,” wildly shaking from the cold, his fear and the physiological effects of failing to take his medication on time. Except for short breaks every two hours for gas, he had no real time to rest, and with only three hours of sleep over two days, he was growing weaker with each pit stop. Exhausted, he wondered, “How much longer could I keep going on?

Kuhn kept himself distracted, awake and alert by pulling out a Tootsie Pops from the stash in his motorcycle jacket pocket. Unwrapping the hard candy with his teeth, he made a game out of seeing how long he could make it last. “From its hard exterior shell to the soft chocolate center, I savored that sucker for as long as I could ride with it,” he said. “I learned not to crush it between my teeth, but to nurse it for more than 30 minutes.”

By staying in the present–yet distracting himself from the discomfort–Kuhn was able to complete his journey in “49 hours, 41 minutes–with 19 minutes to spare,” he said.

Through relating his harrowing story, Kuhn demonstrated the second reason to have an adventurous outlook: It gives hope and strength to others. “If we persevere in the face of pain and loss, we will leave an invaluable legacy behind for others, inspiring others to keep pressing on when it would be easier to quit,” he said. “If we choose courage, resilience and willingness to fight on, others will follow.”

Kuhn clarified that the adventures one pursues in life need not include a 50-hour motorcycle ride from coast to coast. “Adventures are different for everyone, and they change over time,” he said.

At one point in my chronic illness, for example, adventure was taking a walk to the end of the long driveway. At another point, it was finding the strength and endurance to teach a foreign language to a full classroom of children, ranging in age from 5 to 16. Years later, it was finding the courage to keep getting up off the floor every time I fell trying to walk around in public with my own movement disorder, dystonia. I never expected to be able to to take on the challenge of yoga teacher training or to brave a weeklong trip to Paris and Iceland with my now-husband without a wheelchair or scooter. But I did. And I never would have known I could if I hadn’t just jumped in and boldly gone for it, no matter the end result.

Since his diagnosis in 2006, Kuhn has gone onto become an active advocate for people battling Parkinson’s, as well as president of Trinity Western University President. In 2013, he was chosen by the World Parkinson Congress to be an international ambassador, and he was the keynote speaker for its triennial event in Montreal in 2013. He has been profiled in two documentaries dealing with PD–Undefeated and Today We Ride. You can read more about his journey on his blog Positively Parkinson’s.

Kuhn said his next adventure will be a trip to Antartica. “Do you have an adventure in your life? If not, why not,” he asked listeners. “You’re never too old, too disabled, never too beaten down to decide to embrace adventure that comes your way.”