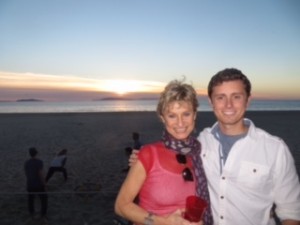 You might be surprised to learn that lung cancer takes the lives of more men and women than any other cancer in this country each year. In fact, it’s been the leading cause of cancer deaths for women in the United States since 1987, but you would hardly know it if you merely looked at the media attention, research and fundraising efforts earmarked for cancer awareness in women. However, the American Lung Association (ALA) estimates that lung cancer accounts for almost twice as many deaths for women as breast cancer does. In fact, while the incidence of new lung cancer cases has dropped 32 percent for men over the past 40 years, it has risen 94 percent for women, according to the National Cancer Institute’s SEER Cancer Statistics. It estimated that 106,470 women would be diagnosed with lung cancer in 2016. More than 72,000 of the 158,080 Americans expected to die from the disease last year were women. The mother of CBS Survivor Season 33 winner Adam Klein was sadly one of those women.

“This is National Women’s Lung Health Week. This is a great time to be talking about lung cancer and how it affects women,” said Klein in an interview on Monday. “[Lung cancer awareness] is obviously very personal to me because my mom passed away last year–just about a year ago–from stage 4 lung cancer.”

After spending 39 days on the island of Fiji competing in, and ultimately winning, Survivor: Millennials vs. Gen X, Klein returned home to be with his mother, Susie, who had been battling stage 4 lung cancer for nine months. One hour after he returned home, his mother lost her battle. After mourning her loss, Klein he took on the role of Survivor in his personal life by getting involved in advocacy for the disease. He donated $100,000 from his Survivor winnings toward lung cancer research and joined the ALA’s LUNG FORCE initiative to inspire others to #LiveLikeSusie.

“My family decided to make the decision to, you know, try to bring as much meaning to my mom’s life and subsequent passing away as possible by going out there and trying to raise money for lung cancer research and raise some awareness for this disease,” Klein explained. As a disease that is widely misunderstood, he said lung cancer “doesn’t have the critical funding that it needs to really push us past the point where we can see that patients can have hope to live with this as a chronically managed disease if they’re diagnosed with late stage lung cancer.” 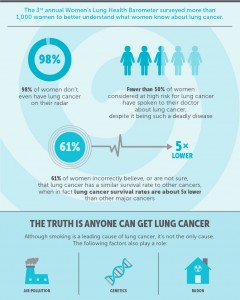 Lung cancer kills more women and men each year than the next top three cancers (breast, prostate and colorectal) combined, Klein said. Yet, there is still a great deal of misunderstanding and lack of awareness about the disease. The ALA Women’s Lung Health Barometer of 2016 found that of 1,000 American adult women surveyed, only two percent had lung cancer on their health radar.

Like so many Americans, Klein never even considered it a possibility for his mother or anyone else in his family to develop lung cancer. “I think there’s this stigma out there that if you get lung cancer, that you did something at some point along the way to get the disease, and that’s not necessarily the case,” he said. “You can just get unlucky just like with any other disease. My mom and our family got unlucky.”

The CDC reports that 7,330 nonsmokers die from the disease each year. Klein said this his mother was the epitome of living a healthy lifestyle. “She never smoked a day in her life. She worked out every day. She ate totally organically,” he explained.

The news of Klein’s mother’s diagnosis was particularly surprising as two years prior, she had been medically cleared to participate on Survivor as well, “to go live on an island for 39 days and starve along with me,” he explained. “We almost got on a family season of the show together. So we never saw this coming.”

The fact that Klein’s mother was a healthy nonsmoker underlines how critical awareness and prevention are. “It’s important for women out there–for everyone out there–to recognize that if you have a pair of lungs, you can get lung cancer,” he said.

Active smoking is still the leading cause of lung cancer, contributing to 80 percent of lung cancer deaths in women. The Centers for Disease Control (CDC) estimates that more than 20 million women and girls currently smoke cigarettes in the United States. Women who smoke are 13 times more likely to develop lung cancer, according to The Health Consequences of Smoking, a 2004 Report of the U.S. Surgeon General’s Report. Fortunately, research indicates that it’s never really too late to benefit from quitting smoking.

Freedom From Smoking With The American Lung Association 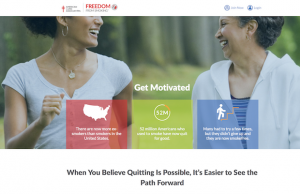 Fortunately, research indicate that it’s never really too late to benefit from quitting smoking. Studies have shown that smokers who quit around the age of 50 reduce their risk of dying prematurely by 50 percent compared to those who keep smoking. Those who quit at age 30 reduce their risk of early death from smoke-related disease by more than 80 percent. The American Cancer Society states that within 12 hours of refraining from lighting up, smokers experience the level of carbon monoxide in their blood returning to normal and the abnormally high heart rate and blood pressure in smokers drops. Circulation can improve in within a few weeks, and coughing and wheezing is reduced. Within several months of quitting, people also experience significant improvements in lung function.

There are a number of smoking cessation programs available for smokers looking to quit, and nicotine replacement products can be effective in reducing nicotine dependence. CVS Pharmacy is currently offering a $5 off coupon on CVS brand nicotine replacement therapy, as well as 30 percent off Freedom From Smoking Plus, which is an online quit smoking program available at FreedomFromSmoking.org. Readers who smoke can also visit select CVS stores and visit a Minute Clinic and speak with a nurse practitioner or physician assistant about a customized smoking cessation program.

CVS Health is the national presenting sponsor of the American Lung Association’s LUNG FORCE initiative for the fourth year in a row. As part of its sponsorship, CVS Pharmacy is running an in-store fundraising campaign through May 23. CVS Pharmacy customers can contribute to LUNG FORCE at checkout in stores nationwide or online at www.cvs.com/lung, with all proceeds earmarked to support the movement.

The LUNG FORCE initiative aims to unite women and their loved ones to stand together for lung health and to make lung cancer a public health priority, to drive policy change and to increase research funding.“We all collectively–not just those of us who’ve been affected by lung cancer–but we all collectively need to do something about it,” said Klein, as one of the program’s Heroes of advocacy.

The Importance of Early Diagnosis of Lung Disease 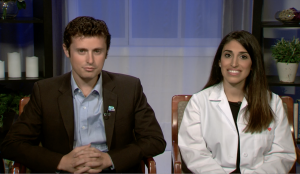 Only 18 percent of lung cancer cases among women are diagnosed early, when the disease is most treatable. According to the ALA, Survival rates are five times higher when lung cancer is detected early. “We want women to be aware that this disease can affect them, so that they take preventative measures like quitting smoking and also so that more people get involved in raising money for this very important cause that kills more people every year than any other cancer,” Klein said.

In 2014, CVS became the first national retail pharmacy chain to stop selling tobacco products. Of the pharmacy’s trailblazing stance against tobacco, Addison Meth, a nurse practitioner and senior practice manager for CVS MinuteClinic, said, “We’re very proud of the decision that we made to pull our tobacco products from the store. It really didn’t align with our purpose of leading people on their path to better health.”

Klein also found advocacy aligning with his purpose this past year since his mother’s death. “Not only did I never expect my mom to get lung cancer and certainly not pass away from lung cancer, but I never expected to be in a position where i would be an advocate for this disease,” he said. “But I’m here, I’m speaking about it, because there are so few voices that are saying these things. You know, it’s just not out there in the news, in the media. There aren’t celebrities talking about it because people think, ‘If I don’t have it, it’s not going to affect me,’ or if you do have it, that you did something along the way to get it or ‘deserve’ it, and that’s just not the case. No one deserves lung cancer. No one deserves to have to go through this kind of experience that my family went through. So anything that I can do to try to change that for another family, that’s what I have felt in the last year has been my calling and my purpose.”

Klein observed that while enduring the game of Survivor was extremely difficult, it didn’t compare to the traumatic realities of a lung cancer diagnosis. “We went through a category 3 cyclone, like I didn’t eat for like 39 days, I lost a ton of weight, and it was brutal physically,” he said. “And really, to me, none of that mattered compared to what was going on at home.”

He said that he believes part of the reason why he won the CBS challenge is because he had the motivation to keep going full-force, just as his mother always did. “I knew my mom always lived life at 100 percent. She was always dancing and laughing and smiling and thriving through life, up until literally her very last moment,” he said, “And so I knew that if she could get through the pain and the challenges that lung cancer throws at a person and throws at a family–if we could get through that as a family, then I could get through anything that the game of Survivor threw at me.”