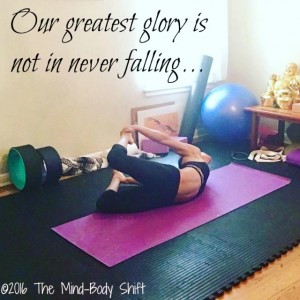 Even when it can seem like the vast majority of my dystonia symptoms are in a strong remission, there is no guarantee that that they will stay that way. Just because I am able to do a two-hour intermediate yoga practice one day does not mean I will be at all steady on my feet the next day—or even later that night. While this reality can be disappointing for friends and family who are counting on me to be healthy enough to keep plans, it is even more heartbreaking for me when I have allowed myself to get my hopes up, only to have them smashed into the rocks of relapse once again.

It had been quite some time since I last needed a “chauffer” to get anywhere, assistance walking around the apartment, or help taking a shower. I had gotten into the groove of daily, gentle yoga practice of at least 20 minutes, and I was starting to ramp back up to an additional one or two extended periods of more intense yoga per week. With the confidence of having a new car, I had made three round trips of 45 minutes or more in the last month—something I had not come anywhere close to doing in more than six years. I was cooking up new recipes in the kitchen, taking care of my own container garden (started with the help of my parents), and was even going out socially on the weekends, including a networking event the other weekend that involved a 5-mile nature walk. I was writing daily again and had even reached the point where I felt ready to take on the awesome project of writing about the journey from car accidents, catheters and needing parental caregivers as a single girl to a strong semblance of independence, mobility and more stable health as a married woman.

However, I had an acute reminder of the uncertainties of chronic illness this past weekend. On Sunday morning, I spent a half hour to 45-minutes doing yoga. I had intended to keep the practice less physically taxing and on the shorter side as I had a crazy, long practice the day before. I rested for a few hours before heading to a niece’s 5-year-old birthday party, where I sat in the shade and socialized for another few hours. Afterwards, my husband and I got into the car to head to what’s become an annual 4th of July celebration at the home of friends’ parents. Sitting in the passenger seat, I knew something was wrong. I immediately felt completely drained, as if my eyelids, head and limbs were being pulled down by heavy weights, and I could feel the familiar trembling of muscles beginning to contract, pull, twist and turn.

By the time we arrived at the barbecue, I knew that I would have trouble staying on my two feet. My arms and hands were already starting to freeze in that frightfully familiar claw. I took the medication I reserve solely for a harrowing dystonia storm, but I’m afraid it was already too late. My tailbone and legs were getting increasingly unstable, and by the time we had greeted everyone and made our way over to the refreshments, I had to reach out for my husband’s arm and say, “I think I’m about to fall.” And I did, but fortunately his reflexes have become so fine-tuned over the years, he was able to catch me far before I would hit the ground. Knowing how much we were looking forward to the night, I protested to my husband and a couple friends that I was fine, but they insisted—rightfully so—that we just go home so I could rest.

On the walk out to the car, I collapsed two more times. One oblivious bystander called out, “Someone is awfully sleepy!” My jaw was stuck open in spasm, so I couldn’t explain that I wasn’t just yawning or being held up by my husband out of desire for affection. It reminded me of the countless times in the past when I was temporarily paralyzed from being able to educate ignorant nurses, EMS responders and store staff. While I felt a familiar rush of indignation, the tears that continued to collect in the corners of my eyes confirmed that what I really felt was disappointment that my body couldn’t hold up for a few more hours. 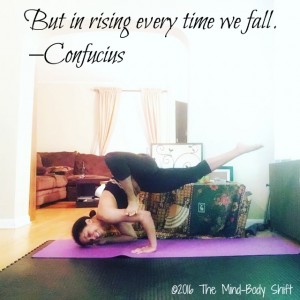 One can’t help but speculate about what triggers these temporarily relapses of disease: Falling off the wagon more often with the brain-stabilizing ketogenic diet, a lack of sufficient sleep, overdoing it with yoga, overheating from the summer temps, or too much time spent in one spot at the computer? I realize it’s most likely a combination of all of the above. And rather than beat myself up about needing my husband to walk me from room to room, to help me in the shower, and to retrieve anything I might need for a couple of days, I instead must embrace this time to rest and recuperate, to listen to my body, and to get my routine back on track.

What’s one missed barbeque, in the grand scheme of life? There will be countless others that I will enjoy with enthusiasm, just as I did at one the weekend before. This is not a descent back into a deteriorating state of disease. I have not lost a battle. This is just a temporary setback—a warning sign from my body that I must respect and heed by giving it the attention, rest and nourishment that it requires. When I have done so in the past, I’ve rebounded quickly before. I feel confident I will do so again.

My goals and dreams are just as relevant, real and possible. I will pursue them as best as I am able. I will continue to document my healing journey, and share my story wherever and however I can. Inspiration does not come simply from our successes, but more so from how we pick ourselves back up after we fall.