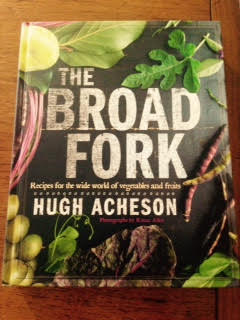 One of America’s top chefs Hugh Acheson is committed to helping people make the most out of fresh produce plentifully available in their communities, from local farmers, regional farmers markets and Community Support Agriculture (CSA) programs. We recently spoke with Acheson about healthy cooking, his new recipe book on seasonal fruits and vegetables, and his efforts to get Americans excited about leafy greens with The Greens For Good salad contest sponsored by Newman’s Own Foundation.

How To Cook With CSA Vegetables

In his new book, The Broad Fork: Recipes for the Wide World of Vegetables and Fruits, Acheson offers approachable and tasty solutions for those wondering how to healthfully broaden their palate with produce. The book answers questions people have about CSAs, about vegetables and fruits that appear in their markets and how to use them in delicious dishes.

The Bravo Channel’s Top Chef Masters judge said the book really began with the question: What the heck do I do with kohlrabi? As the resident chef in his neighborhood, people seeking culinary advice kept asking him about this vegetable. “It got to be easier to answer them in book form, rather than reiterating over and over again,” he said in a recent interview. “So, kohlrabi is this crazy looking vegetable that people just have no idea what to do with, so they typically make a slaw of some sort. But you can dice it, puree it, roast it, shave it or steam it. So there’s a ton of different options you can do with it.”

The chef/partner of Five & Ten, The National, Cinco y Diez, Empire State South, and The Florence said the book is really not about the food he makes in restaurants. Rather, Acheson said The Broad Fork’s focus is more on the food he makes for dinner when he’s home with his kids Beatrice and Clementine.

“We need to remember that food is not an inconvenient thing. Food should be really fun and easy to make. The best time you’ll ever have in your life is making things in your kitchen with your kids,” he said.

Getting Creative With The Greens For Good Salad Contest

One of the ways he is encouraging folks across the nation to get creative with their healthy food choices is inviting them to participate in The Greens for Good Contest, sponsored by Newman’s Own Foundation. “It is asking America to really present their most amazing salad recipes with a Newman’s Own dressing, and enter it in the contest,” he said.

The contest runs from now until August 21, and the winner of the grand prize will be announced in late October. Salad lovers in America can submit their favorite recipes by visiting www.NewmansOwn.com/GreensforGood and click on the “Greens for Good” tab. The top ten finalists will be posted online for public voting to help determine the Grand Prize winner. The winning salad creator will receive $35,000 to donate to the charity of their choice. Nine other finalists will receive $1,000 for donation to their own favorite charity.

“It’s a pretty amazing thing,” Acheson said. “And it’s just another example of a great company like Newman’s Own–and the great legacy of Paul Newman–giving a ton of money to charities that are making good in a lot of communities.

The James Beard Best Chef Southeast of 2012 will be supporting his charity Seed Life Skills this year, an initiative down in his home state of Georgia. The charity is modernizing the classic home economics curriculum into a contemporary version of life skills. In addition to teaching DIY skills and consumer finance skills, students learn how to poach an egg, roast a chicken and make a simple soup and a salad.

“To me, a salad is a seasonal representation of what’s out there and it should be just an amazingly achievable thing for everybody to do,” said Acheson. “We’ve pushed the envelope of what it is a salad really means now more than ever.”

When discussing the key attributes of a great salad, the chef said, “I’m looking for seasonal balance. I’m looking for beautiful richness and fun. And I’m looking for a salad that even an 8-year-old can’t stop eating. And you can do it. You just need to find the right things. It’s hard to get 8-year-olds to stop eating corn, so that’s a good thing.”

Flavorful and Healthy Vegetable And Fruit Recipes For All 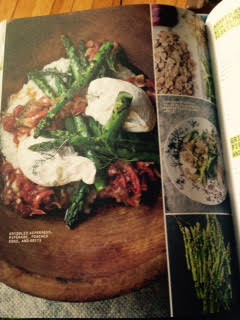 In The Broad Fork, readers can cross-reference the list of diverse vegetables included in their CSA box with a plethora of the chef’s recipes. His delectable dishes include sweet potato gratin; roasted pork tenderloin with bok choy, curried tomatoes and avocado; grilled okra; and raspberry cobbler with drop biscuit toppings. The recipes are divided up seasonally; summer produce includes basil, berries, cucumbers, leeks and tomatoes.

“Sometimes you just need that little gateway to really pull the blinders off how you’re cooking,” he said. And you need a little inching and pushing toward something greater to make a great salad. So that’s what we’re trying to do, and I think that’s what the Greens for Good campaign is all about as well.”

Acheson believes that Americans today are eating healthier than ever and are more active than ever. “I think it’s just time for us to really eat food that makes us feel great—not just about ourselves, but about communities, farmers and everything involved,” he said. “The more respectful we are of food, the better. And the more you understand the seasons, the more you understand food. Understanding seasons is getting out there and seeing what’s in your locality.”

He suggests the best way to invest in your community is to find the local farms and supporting businesses in your area  to which you wish to contribute. “There are a lot of farmers in my community—and I know there’s a lot of famers in your community—who need our help,” he said. “Bridging that gap of finding those people to purchase stuff from warms my heart and makes me think I’ve done a good thing, and I’ve sought out the best stuff in my community, and I’ve learned a name and made a relationship with someone that I want for a long time.”