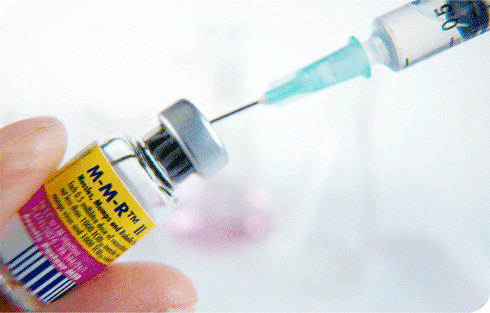 The recent measles outbreak in the United States has spread widespread concern and controversy over vaccinations and social responsibility to protect the community from public health risks. According to the Centers for Disease Control (CDC), 102 cases of measles were reported in 14 states during the month of January, mostly in people who were unvaccinated for the disease. More than half of cases, 59, are linked to initial exposure at Disneyland in Anaheim, Calif. in December, states the California Department of Public Health. Health officials believe that this outbreak stems from a person with measles from abroad visiting one of the Disney Parks.

“It’s only January and we have already had a very large number of measles cases. As many cases as we have all year in typical years. This worries me and I want to do everything possible to prevent measles from getting a foothold in the United States and becoming endemic again,” said Anne Schucht, director of CDC’s National Center for Immunization and Respiratory Diseases, at a CDC press briefing on Jan. 29.

The measles was officially declared eradicated in the U.S. in 2000 when there was no continuous transmission of measles for more than a year. However, the population has not been immune to outbreaks brought from abroad; approximately 20 million people around the world acquire measles each year. According to the CDC, during 2001–2012, there was a median of 60 reported cases of measles each year in this country (with a range from 37 to 220). Yet in 2014, there were 23 measles outbreaks in the U.S.. A missionary traveling from the Philippines infected 383 unvaccinated Amish in Ohio (who reportedly have religious objections to vaccines)—the largest outbreak reported in the U.S. since 1996. Many of last year’s 644 cases of measles—more cases than the previous five years combined—were linked to travelers from the Philippines, which, according the World Health Organization (WHO), had 21,403 confirmed measles cases. 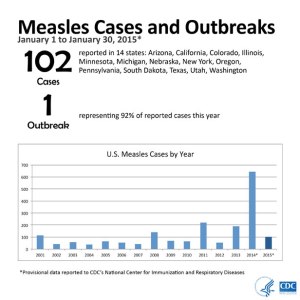 In 2008, there were three large measles outbreaks in the United States and 140 confirmed cases, largely attributed to the spread of disease in communities with high numbers of unvaccinated people. In 2011, more than 30 countries in Europe reported an increase in measles, and the majority of the 220 cases reported in the U.S. were attributed to travelers from France. Finally, there were 159 cases of measles reported from the first eight months of 2013, with 82 percent of the cases in unvaccinated people. According to the CDC, 13 percent of these cases occurred in infants under 12-months-old who were not yet eligible for vaccination and 79 percent of cases had philosophical objections to vaccinations.

The anti-vaccination gained traction after a 1998 report by British physician Andrew Wakefield in the medical journal, The Lancet, posited a link between the MMR vaccine and autism. The Lancet eventually retracted the report, questioning the scientific methods and financial conflicts of Wakefield, who was found by a British medical panel in 2010 to be dishonest and in violation of basic research ethics rules.

Yet parent groups continue to express concerns about continued associations between vaccines and autism and mental disabilities—from the MMR vaccine to the HPV vaccine. Proponents of holistic health and all-natural lifestyles have also been wary of vaccinating children with “toxic chemicals,” preferring to rely on nutrient-rich eating and holistic immune support to keep their families healthy. A news release by the nutrition education nonprofit Weston A. Price Foundation states, “well-nourished children easily recover from infectious disease and rarely suffer complications.”

Yet both unvaccinated and under-vaccinated children may be at risk for developing vaccine-preventable diseases, like measles. An emotional editorial by a Phoenix pediatrician Tim Jacks, MD, whose family was recently exposed to the measles, highlighted the risk of the virus to the immuno-compromised, like his 3-year-old daughter with acute lymphoblastic leukemia. Unable to receive further immunization until after her leukemia treatments end, she is part of a population that “cannot be protected, except my vaccinating people around them,” Jacks said.

“Herd immunity is extremely important because it is impossible to protect 100 percent of any given population with a vaccine,” he said. “The ‘herd’ of individuals protected against a contagious disease shields those with weakened immune systems or those who have not been vaccinated against the disease.”

A study published in Pediatrics on Jan. 15 found significant geographic clusters of vaccination refusals and under-immunization among 3-year-old children in Northern California, from 2010-2012. Last fall, KQED reported on the increase in the number of parents filing personal beliefs exemptions (PBE) to immunizations throughout the state of California from 2007 to 2013, with the opt-out rate for vaccines doubling. In the Bay Area some clusters reported vaccine refusals greater than 10 percent, which could affect herd immunity. However, recent statistics from the 2014-2015 school year reveal that opt-out rates have dropped statewide for the first time since 1998 (the year Wakefield’s vaccine report was published), due to a new law requiring parents to meet with a healthcare provider about the benefits of risks of vaccinations and vaccine-preventable diseases before filing a PBE.

“One out of every 12 children are not receiving measles vaccinations on time,” said Pinckey.

According to health officials, one dose of the MMR vaccine is 95 percent effective. Two doses of MMR, which is recommended at 12 months of age and in between 4 and 6, have an effective protection rate of 99 percent. Pinckney said, “There is a very small chance that an immunized individual can still contract the measles.”

For every one person that is infected with the measles, the disease can spread to 18 other people making the measles exceedingly contagious, according to Pinckney. Measles is an airborne, viral disease that typically develops first with a fever for a couple days, followed by a cough, runny nose and red eyes (or conjunctivitis). A red rash appears within a few days, usually first on the face and then spreading downward to the rest of the body. Droplets released in the air from sneezing or coughing are active and contagious on infected surfaces for up to two hours. The CDC recommends that infected people should be isolated for four days after developing a rash.

According to Pinckney, patients with measles are treated with antipyretics (fever reducers), fluids and treatment for bacterial superinfections, including pneumonia.

The majority of conventional healthcare providers agree that those most at risk for developing measles at this point in time are those who have not been immunized. The physician social networking company SERMO polled 3,000 doctors and found that 92 percent of physicians believe that the current measles outbreak was directly attributable to parents not vaccinating their children. Of those surveyed, 79 percent felt that children who are unvaccinated for non-medical reasons should not be allowed to attend public schools.

“I will not accept a child in my practice if they do not vaccinate,” said Dr. Linda Girgis, a family practitioner based in New Jersey, in a press release. “Measles kills one or two out of every 1,000 persons who become ill with it in the US. No child will die from a vaccine-preventable disease on my watch.”

However, documentary filmmaker and activist Leslie Manookian argued that recently vaccinated people are also at risk for spreading the disease. “Numerous scientific studies indicate that children who receive a live virus vaccination can shed the disease and infect others for weeks or even months afterwards,” she said in a statement. “Thus, parents who vaccinate their children can indeed put others at risk.”

Sally Fallon Morell, president of Weston A. Price Foundation and author of Nourishing Broth, added, “Health officials should require a two-week quarantine of all children and adults who receive vaccinations. This is the minimum amount of time required to prevent transmission of infectious diseases to the rest of the population, including individuals who have been previously vaccinated.”